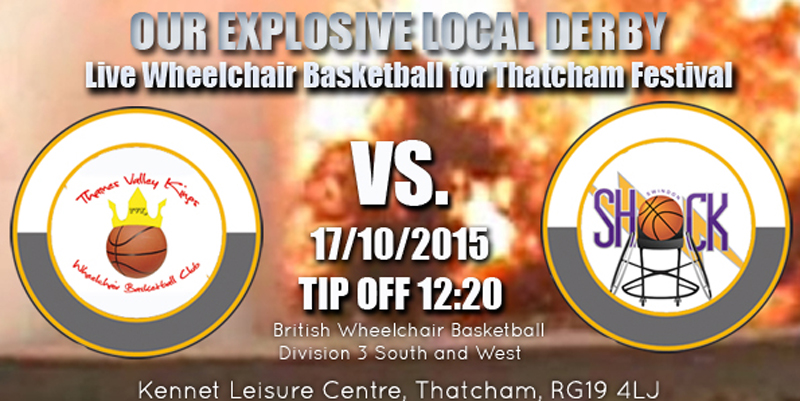 Match reports from the second round of matchs in Division 4 South - the features are all Home games held at Kennet Leisure Centre, Thatcham.

Joe scored the opening basket in the 2nd minute of the game, Aces where quick to answer also scoring in the 2nd minute. Aces continued to find the net, although missing 2 free throws from the line; Reece answered back by scoring 6 points. End of the first quarter Kings 8 v 12 Aces. The second quarter started with Kings going out strong and determined to stop Aces scoring.
Reece scoring another 2 points and Joe scoring a further 2. Reece was fouled in the act of shooting but was not able to score from the free throw line. There was a 6 point difference as the teams went to the bench for half time. Kings 12 v Aces 19.

After half time aces came back fighting and went on to score 8 points, unanswered by kings who were unlucky that their shots were not dropping until Joe scored in the 5 minute.
Followed a minute later by Reece and Captain Nigel scored to finish the quarter. End of the 3rd quarter 18 kings v 29 aces. Kings changed their tactics and aces only scored 4 points in the 4th quarter, Kings scoring 6 points and winning the quarter with successful shots from Joe (4points) and Reece (2 point).

For the second game of the day Kings went out strong and won the first quarter scoring 6 points to Blazers 4. Reece scoring 4 points and Joe scoring 2 points. For the 2nd quarter the teams tried hard to break each other defence and to score with both teams only scoring 2 points in the whole 10 minutes of game time. Joe was the successful score for Kings. Nick was fouled in the act of shooting but was unable to score from the free throw line. As the teams went to the bench for half time, kings where in the lead with 8 points to Blazers 6.

The second half started with Grant making a successful shot from the free throw line after being fouled in the act of shooting, but unfortunately he was not able to make a second shot count. Blazers scored to bring the game to a 1 point difference with them in the lead. Joe was successful in scoring 2 points to bring the kings back in the lead by 1 point. A change in tactics by blazers saw them score 8 points that could not be answered by the kings. At the end of the 3rd quarter blazers were in the lead with 18 point to kings 11. Blazers started the 4th quarter with a full court press and the kings struggled to get the ball to drop in the net. Fatigue was setting in after playing almost 80 minutes and trying to break the press.

Joe went to the line for 2 free throws but was not successful. Blazers scored 16 points and kings were unable to find the net. It was a tough 2nd game of the day for the Kings who at half time where in the lead and worked hard to the end.

The team where disappointed that the scores were not closing as the final whistle blew with the home crowd cheering till the end.

Match reports from the first round of matchs in Division 4 South - the features are all Away games held at Aylesbury.

Thames Valley Kings 13 v 30 Aces 2
This was the first game of the season for the team, which saw four players make their debut in the British Wheelchair basketball league. Two of the players where returning for their second year of playing in league games. The team of 10 allowed for sub rotation within our 16 points classification allowance.
Aces where first on the score board followed by Joe, scoring a basket in quick return. We ended the 1st quarter with a one basket difference, with the score at TVK 6 v 8 aces. Wayne got an early score in the 2nd quarter within the first minute bringing the scores level, a change in Aces tactics and the kings unlucky with the shots not dropping saw the half time score as 8 TVK v 18. The team went out strong after the half time break showing strength and courage however they could not manage to close the gap, Grant made his first basket of the season and brought the end of quarter score to 10 kings v 24 aces. The 4th quarter saw captain Nigel get a basket and the free throw within the first minute with the team fighting to the end of the quarter.

The second game of the day was started after a 10 minute break from the previous game. The team went out with their head held high, ready for another 40 minute match. Anthony scored his first basket of the season having only being playing for 6 weeks! The team worked hard on defence and kept the Blackhawk scoring low; 1st quarter scores tvk2 v 6 Blackhawks. The second quarter saw 2 of the team take free throws but they were unlucky and the shots did not drop. Joe and Reece from our junior team both scored baskets in the 2nd quarter, end of quarter score TVK 6 v 14 Blackhawks. After the haft time break captain Nigel lead the team out strong and he scored a basket within the 1st minute, the teams traded baskets at both end of the court with the Blackhawks winning the quarter by 1 basket, TVK scoring 6 points , end of quarter 3 scores TVK 12 v 22Blackhawks. With a 10 point difference the team went out showing strength and courage in their commitment to fight to the end however they could not close the gap. The scoring was tied in the last quarter with both teams scoring 2 baskets. Final score Thames Valley Kings 16 v Blackhawks 26. The 2 games back to back provided a challenging day of games for the team with much to learn from, ready for the next round of Division 4 at our home ground Kennet Leisure Centre on Saturday 24th January 2015.