With both teams having already played each other in a very close match up more of the same was expected in this game. The first quarter saw a low scoring start with Kings getting the first two points on the board through Brad, Cornwall then replied with their first two points for Brad to then score once more that saw the end of a fairly scrappy first quarter with Kings 4-2 in front.

The second quarter saw a much more productive quarter where Ant put the first two points on the board for the Kings. A flurry of baskets from Cornwall saw them take a four point lead for Joe to then add two more points for the Kings, a further four points from Brad saw the Kings keep up with the Cornwall consistent scoring to see the quarter score end 16-12 in favour of Cornwall.


The second half saw Cornwall put the first two points up, Kings then replied through Brad and Peter who both scored two points to see the score to 16-18. Another flurry of Cornwall baskets saw them take another good lead for Peter and Joe to add four more points to keep the score close heading into the fourth quarter with the score being 20-28.

The final quarter saw a good start from the Kings with Ryan putting the first two points up for the Kings with a chance to add one from the free throw line but unable to score. Joe then added another two points for the Kings with again another free throw opportunity but unable to connect. Cornwall once more scored eight unanswered points for Brad to add two more to the Kings total. Another two missed free throws from Joe saw Reece pick up the rebound to score for the Kings. Joe then scored two free throws to see the game end 30-43 in favour of Cornwall. Not the best game from a Kings perspective but a strong lesson learnt who remain positive with the right attitude.

Very much a game of two halves saw the Kings start very brightly. After the cougars first basket of the game the Kings were very much on top. Reece scored the first 2 points for the Kings in the 1st minute, Joe then added 2 more to the total with a bonus from the free throw line. Further baskets from Reece and Ryan saw the gap between the two teams widen with Cornwall having no reply. The Kings lead 11-3

The second quarter saw a better and closer match. Again Cornwall hit first but that saw Peter bag the Kings next 6 points with Cornwall also keeping up. Baskets from Brad, Joe and Peter added more to the Kings tally with Cornwall not scoring in the final four minutes. That saw the end of the half with Kings in front 23-11


The second half was much different, Cornwall came out flying scoring the first 4 points. Reece the replied for the Kings but that saw a flurry of Cornwall points with the Kings shots just not dropping. Cornwall scored a further 4 points to the Kings 2 and took the quarter 6-2 with the Kings still in front 25-19

The last quarter was set to be very tense and so it was. Cornwall scored 6 unanswered points as Kings were still struggling to find the net and the score was then 25-25. Brad then scored a much needed basket for the Kings. Cornwall hit back once more with Joe then replying for the Kings in a very back and fourth quarter. Cornwall then hit a further 6 unanswered points for Peter to score to close the gap to four.

Unfortunately the game ended there with Cornwall taking it 35-31. Very disappointing for the Kings but a great comeback from Cornwall.

Kings next match is this Saturday at Kennet Leisure Centre where they will face the Cornwall Cougars - Tip off at 12:20 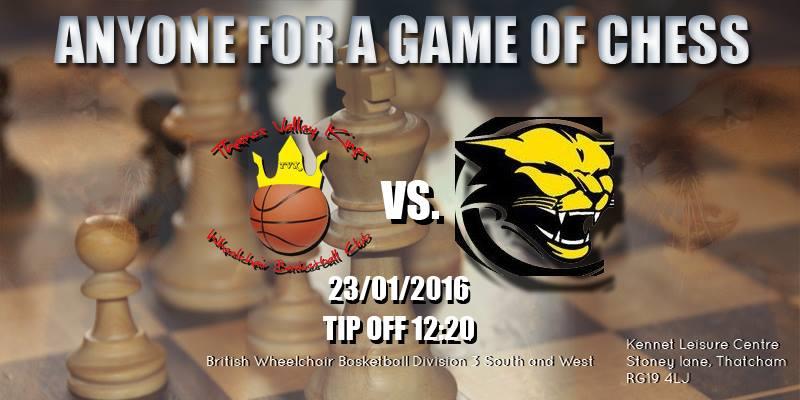