Kings played a Swindon team who brought two Division 2 players (Ben and Mac) who have also played at GB juniors level and have trained with the GB team for the u25s!

Ryan open the friendly game with the first basket of the Div 3 Friendly match. Kings where defending as strong as they could against a Shock team made up of 2 division 2 players and 3 division 3 players.

Reece and Grant both added to the score in the first quarter which finished Kings 8 v Shock 24 .

the team went out into the second quarter and tried different tactics against Shock with Reece adding 4 points to the score and Grant scoring.

DJ did some great defence against Shock player managing to cause a turn over. Brad was fouled in the action of shooting and made the free throw count. The quarter scores closer at Kings 9 Shock 16.
The half time score being Shock 40 against Kings 17 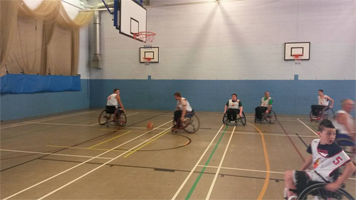 After the half time break the Liam made a bee line for the basket and secured 2 points for the team in the opening basket of the second half. brad was able to secure 3 basket for the team and grant topped the score up.

Nick was working hard on defense with Kieran stopping shocks shots so by the end of the 3rd quarter kings had keep the quarter scores close again, Kings scored 10 against 17 from Shock.
The game score was Kings 27 Shock 57.

The 4th quarter was to be the closes between the 2 teams, kings scored 6 and shock scored 7 points, all scored by Fox. Reece scored 4 points and Ryan was able to break into the key and score another 2 points. the game finished with a score of Kings 33 Shock 64.

As this was a friendly and there was still court time left the team decided to play another quarter, Shock changed their line up and tactics and kings tried different tactics however Reece was the only one to score and shock managed to score a massive 25 points. 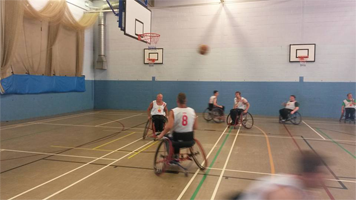 Both teams enjoyed the friendly and Kings player know what we need to work on in training to improve on ready for when we meet the team again in the British wheelchair basketball Div 3 South league. Kings Scorers
Brad - 9 points
Grant - 6 points
Liam - 2 points
Reece - 14 points
Ryan - 4 points